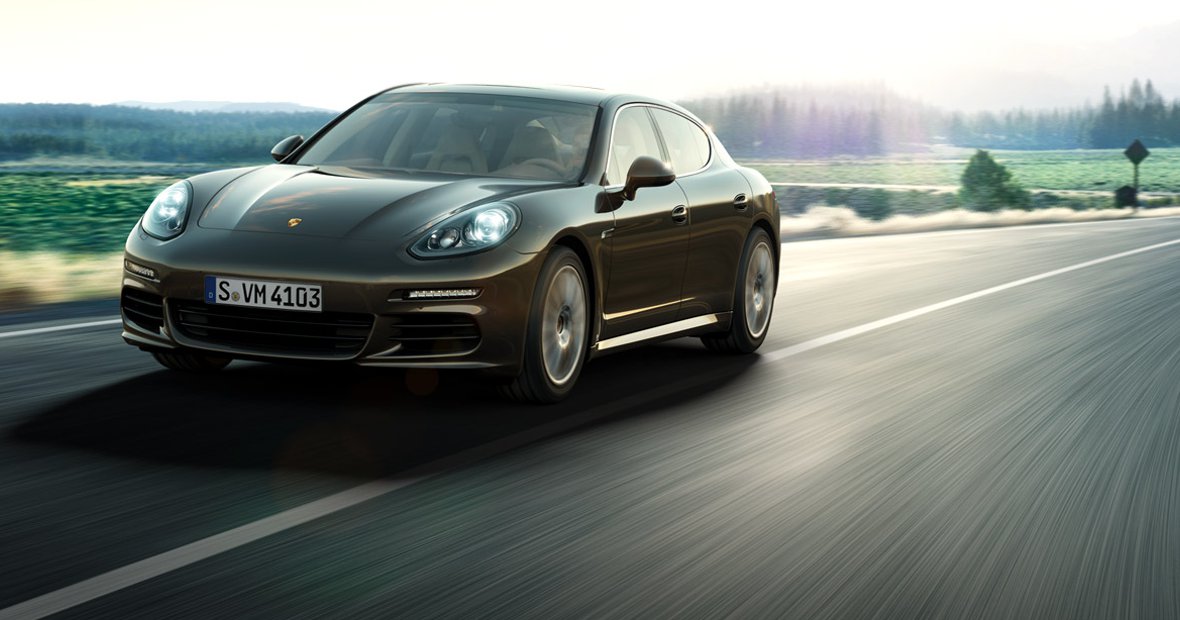 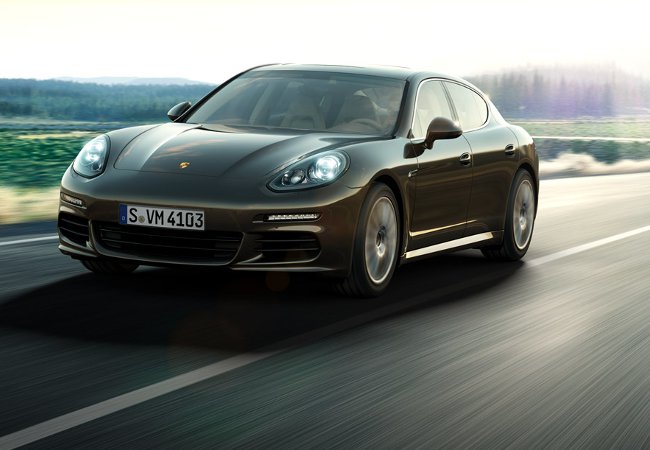 Germany boasts a rich tradition of more than 2,000 years of viticultural customs that over the course of time has developed into quality oriented vineyard practices. This combined with the local state-of-the-art cellar technology, tends to put Germany and her spectacular wine selections at the vanguard of the winemaking world. The wide variety of innovative wines to come out of Germany successfully appeal to every palate as they have widespread allure in taste, aroma and sight.

A large part of this success in wine production is Germany herself. Most vineyards are found within the fertile terroir of slopes, alongside sun reflecting rivers (think of the Rhine with its many tributaries) and steeping hills that are protected by forests that form a natural barrier against abrasive winds. As one of the most northern countries to produce wine in the world, the growing season is long and possesses that ideal balance of rainfall and sunshine. This allows the grapes to ripen slowly and thereby maintain a fruity acidity from developing natural sugars and minerals absorbed from the soil. It is interesting to note that cooler climate vineyards tend to produce wines that are lower in alcohol, whilst being more aromatic and fruitier - the ideal prerequisites for a wine with which to pass a pleasant evening.

Yet even with these general wine growing characteristics, these factors vary significantly from one region to the next and even more so from one vineyard to the next. So that for example in the northern regions of Mosel, Rheinhessen and Württemberg the Riesling tends to dominate the wine manufacturing scene, while further south in regions such as Baden and Bodensee you are more likely to find yourself whiffing the aromatic hews of a Pinot or a Burgunder amidst a wider variety of red wine grapes. Driving our stunning sports car rental we take a look at Germany’s most popular wine growing regions as we seek to uncover the secret source behind their success. 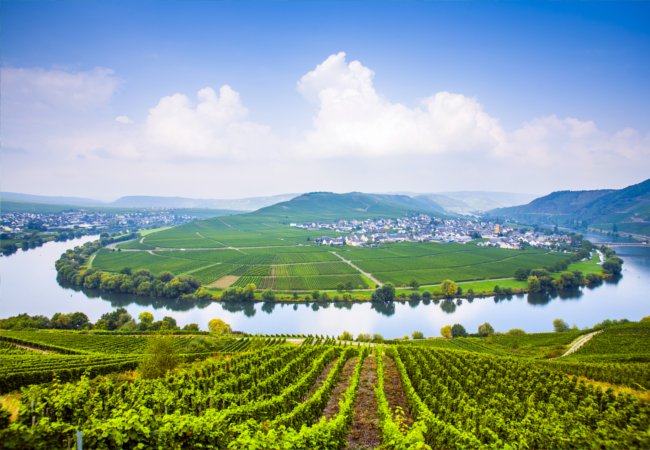 The Mosel - Heading Up Hill

With numerous twists and turns the Mosel River meanders northeast towards the Rhine for over 250 km. The many curves of its sinuous spine, makes its fertile banks prime for growing vineyards and has become known as a Riesling region par excellence. Branching off from the Mosel are its two smaller tributaries the Saar and the Ruwer. Amongst the three rivers and their respective regions, they each produce Riesling wines with their own distinct personality, although a “family resemblance’ is also discernable. The banks of the serpentine route of the Mosel rise very sharply, in parts at astounding angles of 70° gradient, making them one of the steepest in the world. This aspect of Mesoclimate, is part of what gives the wine its unique flavour and is therefore carefully cultivated.

As it is impossible to use heavy duty machinery on the precipitous inclines all the labour must be done by hand including tying each vine to a wooden stake and carrying up the slate soil that was washed down into the riverbeds during the rainy months. The fragrance of Mosel Rieslings is reminiscent of spring blossoms with the slightest hint of effervescence. The wines possess a translucent colour with a light body and a refreshingly fruity acidity. 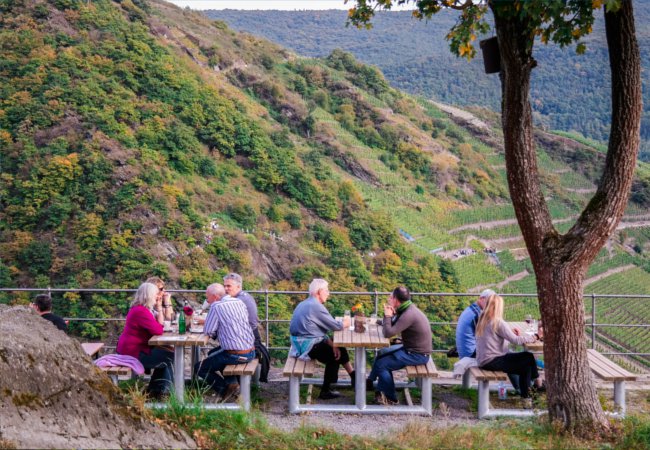 The Ahr River which branches off from the Rhine just south of Bonn is home to a valley of vineyards that has become known as Germany’s “red wine paradise”. As one of Germany’s northern regions it is also one of the smallest and it is enclosed by Altenahr in the west, where the vines are perched along the steep, terraced cliffs of volcanic slate. In the eastern end of the valley, the slopes are gentler while the soil is rich in loess. Four out of five bottles produced in Ahr are red wines, though the velvety and fiery Spätburgunder and the light and charming Portugieser tend to dominate production. The Spätburgunder, Germany’s Pinot Noir, is particularly popular. It is known for its velvety smoothness, that fills the mouth with a sweet and fruity aroma that is often well complimented with a celebratory family roast. 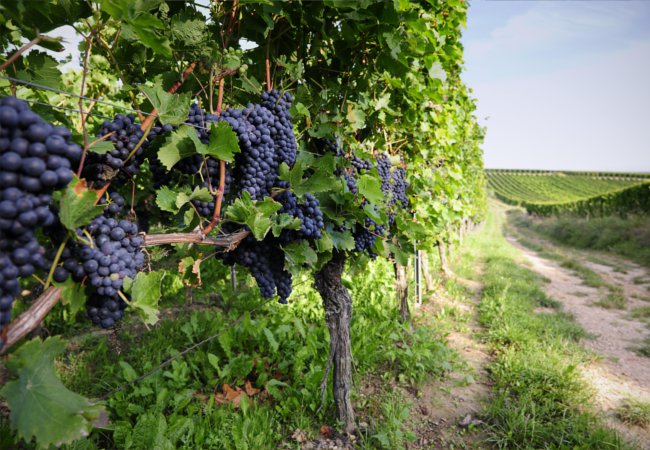 Situated along the bend of the Rhine River, the Rheinhessen is Germany’s largest wine region and therefore offers the greatest diversity of wines. As the Rhine flows from Worms, takes a bend at Mainz and then continues westward towards Bingen, the region’s extensive parameters are filled with rolling green hills, varied soils and a favourable climate, that combined make it possible to grow many types of grape varieties. The classic whites include Rivaner, the ancient variety of Silvaner and the Riesling which all tend to dominate. Red grape wines include the Portugieser and Dornfelder. Rheinhessen wines are generally characterized as having a soft, fragrant, medium-body and a mild acidity. They are very pleasant and easy to drink and are flexibly complemented with many different types of food. Yet saying that, there are also wines of significant class and elegance, that hold a depth and complexity that is second to none. 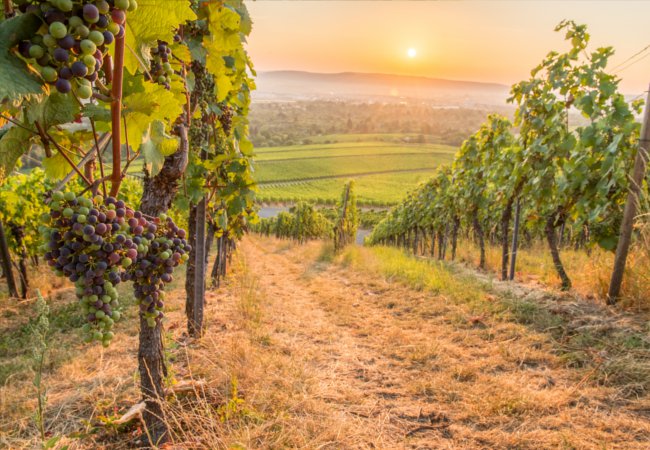 Baden - Blessed by the Sun

The dance of sunshine along the southernmost region of Baden, is said to be the source of the region’s wine growing success. Stretching beyond 400 km the Baden wine valley is nestled between the Black Forest and the Rhine river from Bodensee (Lake Constance) to Heidelberg. Yet the curve of the meandering river also takes in the vine-clad terraces of the Kaiserstuhl, an ancient volcanic massif that continues to provide rich nutrient soil. A strong influence from nearby neighboring Alsace and Switzerland, has meant that Baden viticulturalists have adapted the tradition of pairing their wine with food. The red and white Pinots or “Burgunders” have long been considered highly compatible with food and are one of the most popular wines produced. The white grape Rivaner vineyards are also widespread, producing a wine that is on the drier side and often enjoyed with herbed foods and salads. They are flowery, not too acidic and have a light Muscat tone that is easy on the palate.

With many more regions and wine varieties still highly worthy of being explored, we hope we have inspired your curiosity to take a wine tour of Germany. Hire a luxury Porsche and set out to discover which region’s Pinot Noir really tickles your fancy.