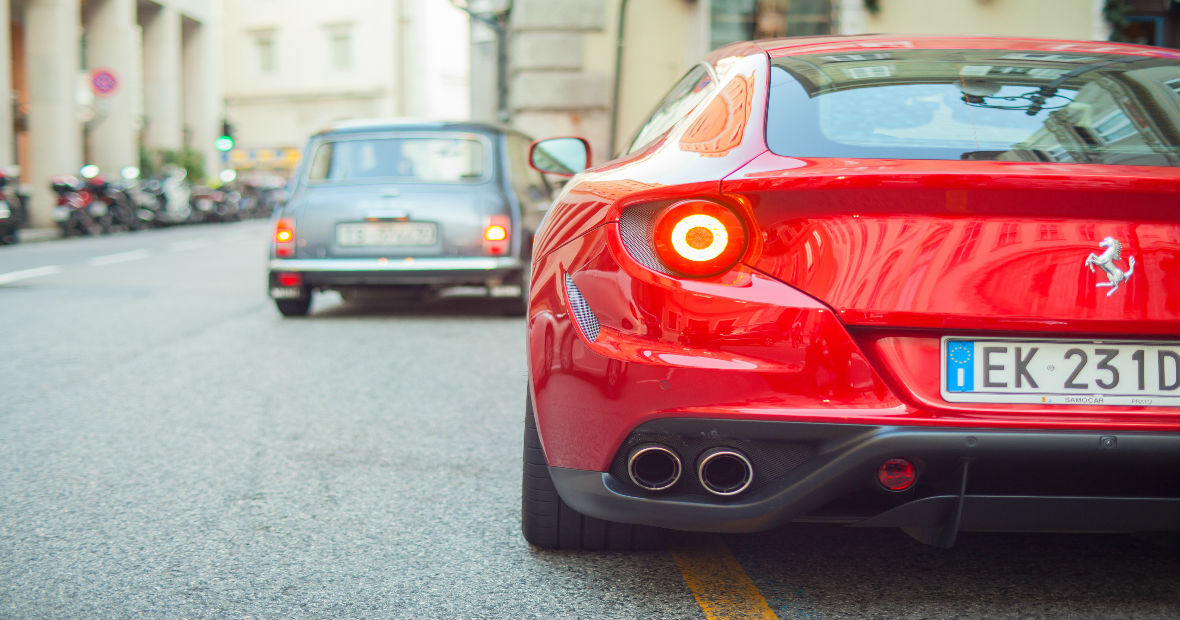 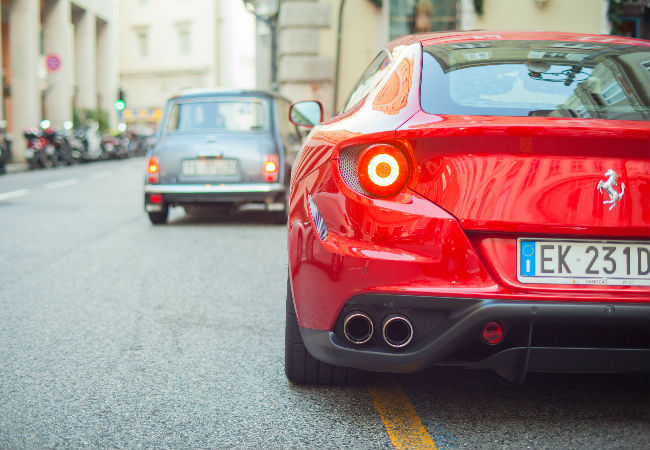 The Best Way to See Rome... Is From Within a Ferrari

While word on the street is that Rome is best discovered by foot, that may well be true, if you don’t mind restricting yourself to just Rome’s historic antiquities quarter of the Colosseo. But there is much more to Rome that lies beyond, such as the beautiful villas and gardens of Frascati and Colli Romani, visit an olive oil refinery for a superb bruschetta tasting with truffles and cheese or one of the many wineries that lie on Rome’s outskirts. But what really gives this experience its edge is getting to it all in the Ferrari, the quintessential Italian Supercar. Discovering Rome in a Ferrari is an opportunity that just can’t be beat as the uniqueness of the experience confronts you with the supercar’s passionate need for speed and the roar of its engine. But hey, if you want to walk that’s cool, it’s totally up to you.

So after the first few days of seeing Rome by foot and your feet are probably aching by now, it’s time to get serious about your visit to Rome. As the old saying goes, when in Rome, do as the Romans do, and by that I’m pretty sure they meant, drive a Ferrari.  For that very purpose one of our Ferraris can be delivered to which ever hotel you may be staying at in the city. Choose between our newest edition in the form of the Ferrari 488 GTB Spider, the dynamic and adventurous Ferrari FF that has the means to take you both on road or off or the highly exclusive Ferrari F12 Berlinetta. These cars are just a slice sample of the fuller fleet of Ferraris that we have available. 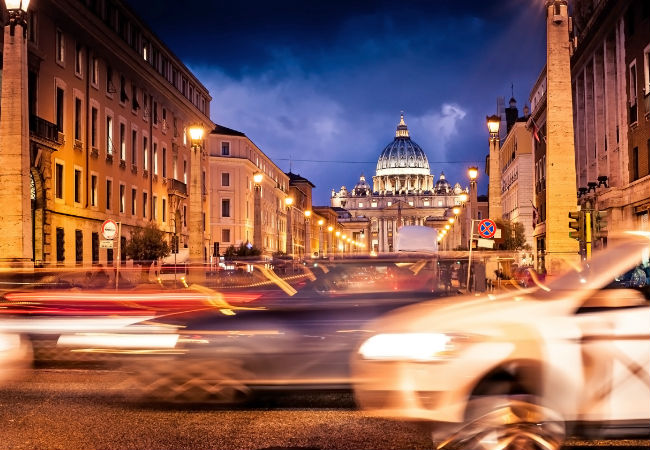 Once your Ferrari is delivered to your hotel accommodation there are all too many places for you to decide on what to do and where to go. Just before you head out to see the city beyond the usual tourist trail, take a drive through Rome’s old historic quarters. Pass by the grand Pantheon  driving the hyper modern and aerodynamic Ferrari over cobble stone roads that trail their way in and out through the city’s numerous narrow alleys.  From the Ferrari’s exceptionally comfortable and luxurious interior see the old and rustic remains of the Colosseum, and the ancient ruins of the Roman Forum. It is this remarkable contrast between the old and the new, the ancient and the futuristic, that just never seems to get boring no matter how many times you do it. 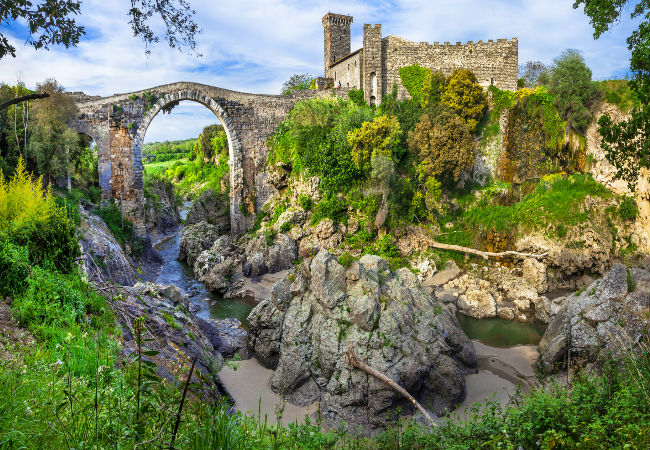 About an hour or so drive in the Ferrari heading north from Rome you will discover the amazing ancient Etruscan city of Viterbo, that in the 13th took on religious significance as a Papal seat. Although much of the historic town was devastated in World War Two, what is left today has been beautifully restored to excellent condition. In a visit to Viterbo you are able to explore the city’s many arches, towers, external staircases and the narrow streets that  run between little piazzas and fountains. Viterbo is an amazing time capsule that has been able to avoid the vicissitudes of change. 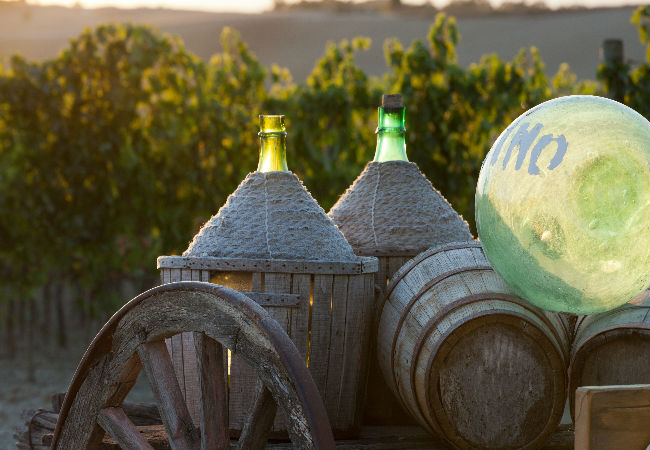 Head eastwards towards Tuscania, one of Italy’s most loved small towns. The seemingly modest small town is a veritable treasure chest of significant historical sites that have all been masterfully preserved. See the Romanesque Church of Saint Peter that dates to the 10th century. A walk inside is nothing short of awe inspiring as you see the many Etruscans sarcophagi built into the facade and the intricately inlaid rose window that symbolically depicts angels and demons. We highly recommend a stop for lunch in Tuscania which is well known for its excellent Italian cuisine. Enjoy the secrets of Italy’s culinary traditions with a meal at Agriturismo Casa Caponetti who offer a most tantalising lunch time meal all served with matching wines on their alfresco patio. Yet leave room to have one of the best house reds you may ever taste at one of Tuscania’s local wineries. 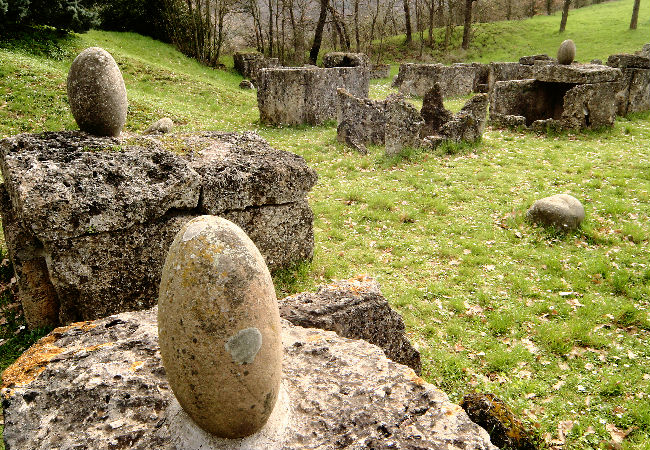 Heading further towards the Tyrrhenian Sea you will arrive at the remarkable ancient town of Tarquinia. Take a wander through the ancient village’s crumbling medieval churches and ancient city squares. Explore the Etruscan tombs now filled with mystery as they are almost concealed in moss and shrubbery. Inside you will find many amazing relics from this far off time, including statues of the sarcophagi, ceramic plates and vases and even a terracotta portrait of the Etruscan people. Stop to break bread in a most traditional ritual in Tarquinia at the artisan bakery. As the bakery chef will invite you behind the scenes to see the magic happen, preparing by hand a wonderfully fresh and warm focaccia for you to enjoy.

As all roads leads to Rome, we recommend returning to the capital by taking the scenic route along the Tyrrhenian Sea. Pass by the pretty marina townships of  Civitavecchia, Santa Marinella and finally Marina di San Nicola. The locals will be much appreciative as you slowly drive your stunning Ferrari through their simple country towns, ever present for them all to admire.