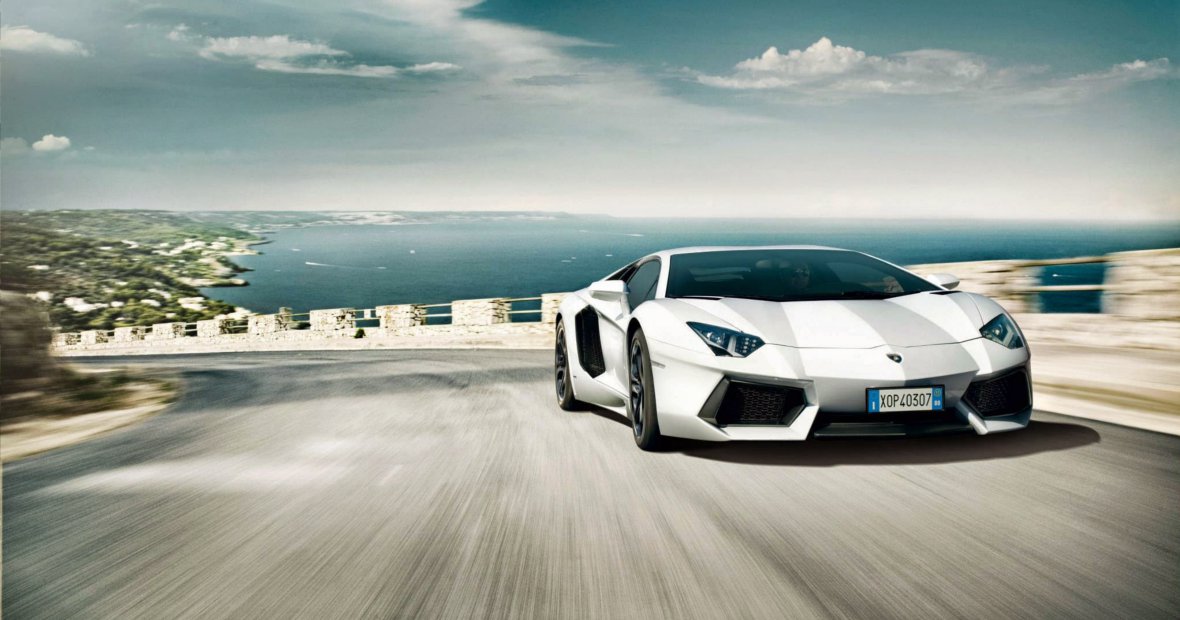 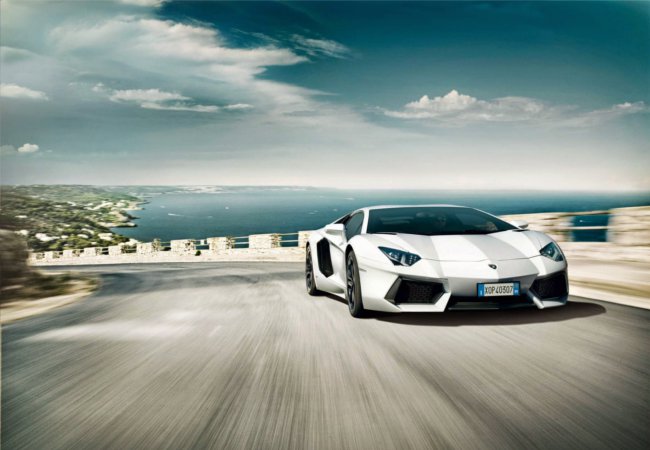 Luxury Along the Ligurian

Welcome back to the second part of my journey as I cross the border into Italy and follow the coastal road that trails along the beautiful Italian Riviera. In this journey we discover Italy’s answer to the French Riviera. While France does seem to have the upper advantage as far as fame is concerned, Italy however does not appear to be lacking in its dolce vita by any means. Tucked between translucent turquoise seas and the rays of a soothing sun, it is encountered with lazy days and sensual nights.

Read the first part of Ethan's journey driving along the French Riviera in a Bentley.

The Italian Riviera you could say is composed of two parts; the lesser known Riviera di Ponente, the riviera “of the setting sun” that starts from the French border and stretches until Genoa, but heading east from Genoa puts you on the ultra glamorous Riviera di Levante or the riviera “of the rising sun”. This section trails its way south east along the crescent curve of the coast, passing through the home towns of folks in the caliber of Georgio Armani and Donatella Versace. Made famous courtesy of Hollywood who broadcasted Elizabeth Taylor strolling along the quay, slim waisted and silk-scarfed. Perhaps not as extravagant, the Riviera di Ponente possesses its own unique charm, albeit distinct from its glamorous neighbour.

Not that I have any problems with extravagance, after all coming out of Monaco that is something with which you have to be quite comfortable. But this time, for my journey through Italy I choose to embrace an even greater sense of extravagance - Italian style, by hiring the Lamborghini Aventador. In no overstated words this is the car that offers a glimpse into the future. In all fairness it was not chosen by me, but my new highly good looking travelling companion Eduardo. Whom you may remember I met at the Monte Carlo Casino the other night? Well I couldn’t quite fault his sense of taste with the supercar’s capability to produce 700 bhp and 560 Nm of torque with a 6.5 liter V12 engine. Sit inside and your can palpably feel the car’s beastly engine that is capable of flying from 0-100 km/h in just 2.9 seconds and a blistering top speed of 350 km/h. While I personally prefer stately looks over engineering power, it is possible that I may have agreed under the spell of Eduardo’s stately looks and captivating power. 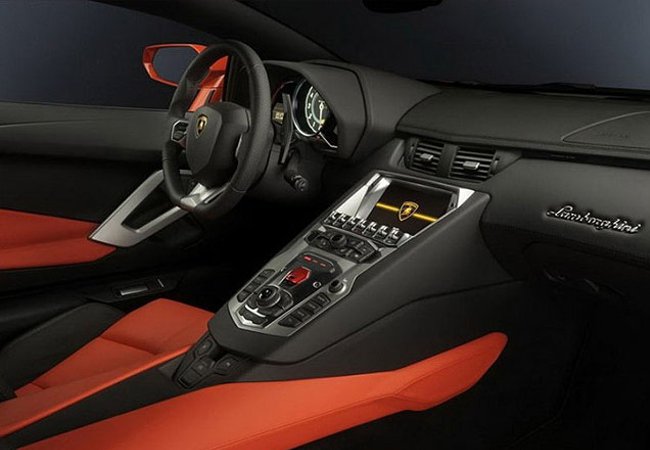 Our journey in the Huracan commenced as we set out from Menton, where ever since the mid 19th century has been an oasis for heat starved brits who are desperate to immerse themselves amidst the colours of the Côte d’Azur and the easy expansiveness of Italy. Along the way we passed through many lovely towns that have each retained their own brand of charm. Unquestionably a particular favourite of mine is Bordighera which is characterised by tall liberty façades and an endless sprawl of gardens.

From there we continue to the famously extravagant town of San Remo. Whilst predominantly known for its bacchanal music festival where the talent rivals that of Eurovision song contests, what is lesser known about San Remo, is the Bussana Vecchia. Perhaps all the better for being off the tourist trail, the Bussana Vecchia is an intriguing artist’s colony. After being deserted for over a century due to an earthquake that devastated the town, in later years the town’s old world charm has started to bud as artists from all over the world have flocked there to be inspired by the creativeness that is now in full bloom. Driving from San Remo to nearby Imperia is a real delight as we pass a sprawling profusion of bougainvillea and date palm trees from which behind them stood daffodil yellow and sorbet orange Mediterranean palaces.

We spend an afternoon in Cervo, embracing Italian cuisine and soaking up the dazzling sunlight in the area between the crenellated castle, the baroque church and a series of elegant restaurants. Afterwards we decide to take the scenic route to Alassio along the Via Aurelia. In this driving tour of Italy, time was our friend and we had no intention of rushing it by taking the more direct A10. Instead, we stride along the shore hugging coast line that offers us spectacular views of the turqoise see below. 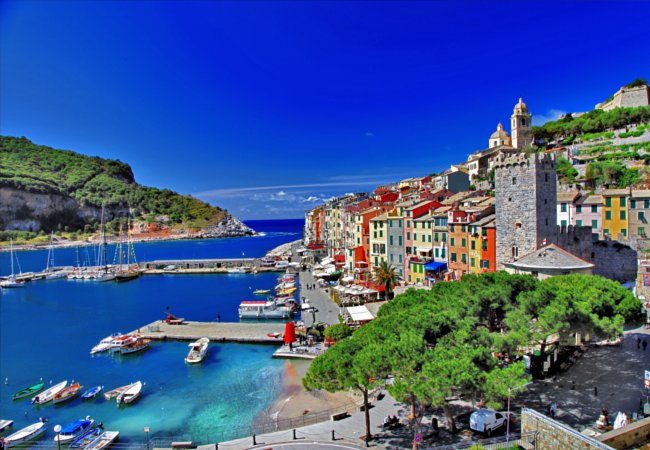 As the sun begins to set over the mountains we arrive in Finale Ligure and stretch out at Boncardo. Nothing short of the quintessential 1950’s vintage bar/beach club, it perfectly met all my preconceived notions of Italian nightlife where the neon lighted space is filled with industrial lamps, concrete floors and receding glass doors. Yet at the same time it acutely differentiates itself with an air of antiestablishmentarianism, that is certainly out of place on the shores of the Mediterranean. Still, we sit down and order as several beautiful young men serve us our drinks of Peroni and Aperol spritz. With buffed silhouettes and volumes hair-dos, the waiters appear to be constantly standing in pose, ready to have their pictures snapped at any moment, by secreted paparazzi cameras that only I and my friend can’t see. All too often we would spot one of them whip out a comb from his back pocket and start working his tuft.

Heading out along the Via Aurelia from Finale Ligure turned out to be even more spectacular then heading in, as the road became even more scenic. It twists its way in and out through deep indentations in the rock and snaked through lush wildlife that eventually brings us into the little hidden port town of Varigotti. Tucked between the sea and the steep forested mountains, the drive into Varigotti gives you that unique feeling of uncovering a hidden world. More in character with southern Italy, the houses that line the shore, like soldiers standing on a battle front, are painted in dark orange and red with numerous olive and lemon trees trying to squeeze their way in between them. We end up spending the large part of the day at Varigotti beach as it could easily be one of the most tranquil and beautiful that I have seen in awhile. Without the typical crowds, but rather a unique sense of calm, time slipped through the hourglass with the soft smoothness of the sand we were lying on. 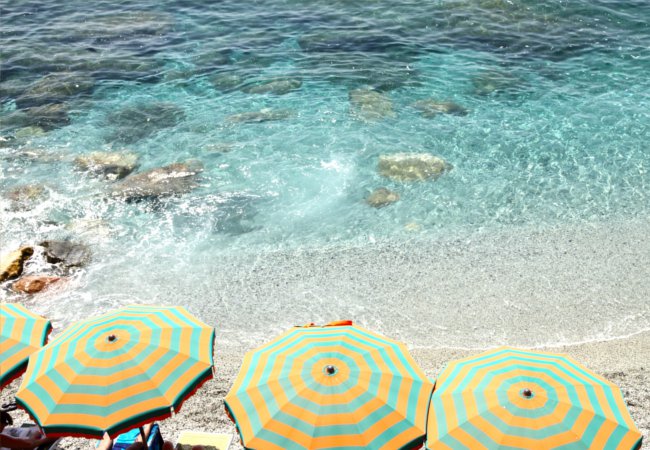 After the calm and understated charm of the Riviera di Ponente, it was time for us to get serious about glamour in our drive through the Riviera di Levante. The divisive marking point is the historically intriguing city of Genoa. In the backdrop of the city’s numerous grand baroque buildings, arches and stately monuments, the Aventador looked nothing short of sensational. We set out to explore the city from head to toe, traversing through the many narrow “vicoli” or alleyways of its old town. We pop into several luxurious boutiques to get a sense of the style on offer, which I can now confirm - I approve. We pass by lovely mustard coloured seaside villas, highly decorated gothic churches and a beautiful old theater all of which fill us with a sense of unabashed splendor.

But before heading out on the road again we enjoy some Italian seafood specialties at Ristorante Zeffirino. A favourite spot of none other than Frank Sinatra, who would frequent the restaurant often, in search for supposedly just one more serving of the pesto pasta. We continue to drive along the coast through the thick of the night, which granted was somewhat unnerving, particularly in the Aventador. But then again if we were to see ourselves as warriors of adventure, at the frontier of hedonism, these are the sorts of dangers that should rightfully be expected of us. Duties aside, I think we were both quite relieved to finally arrive at our hotel in Portofino.

Although I’ve been told there are numerous beautifully elegant hotels in Portofino, it is always hard to look past the classical favourite, Hotel Splendido. A former Benedictine monastery, it appears to have acutely changed tracks from one of asceticism to one of aestheticism. Design to the tastes of the world’s half a percent who really have seen it all, it is bestowed with a classically stylish interior decoration, a trompe l'oeil painting that features in the master bedroom, a magnificent bathroom that boasts heated marble flooring and a round and sumptuous bathtub, not to mention the double vanities and armoires. The hotel evokes every sense of the il jet set, who had put Portofino on the tourist map in their true belle epoque manner. 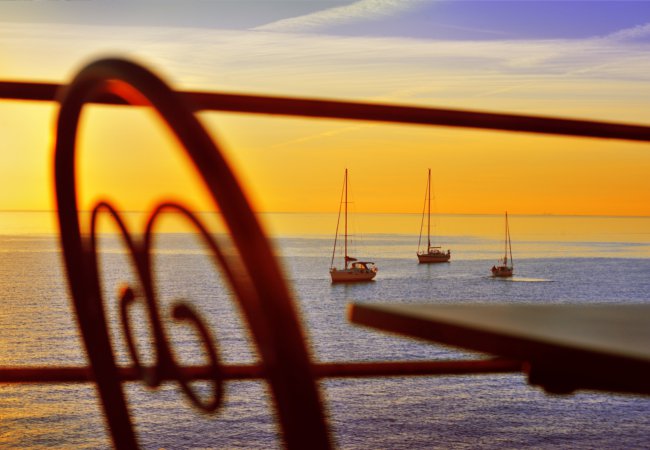 Having a reputation for hosting an excellent night life, we make our way to Santa Margherita Ligure, where we treated ourselves by sampling the cocktails that are served at Hotel Lido Palace. The local favourite appears to be the “Tintoretto,” made from pomegranate and spumante. An exotic fruity cocktail, the tintoretto has a soft pink colour, which to be perfectly honest looks like a 5 year old girl’s strawberry milkshake. Yet there was no indication that the hefty Italian men at the bar felt it deprived them of their masculinity as they licked up the soft moustache residue it left on their lips.

The next stop in our route was Camogli, tucked into the thyme scented hillside, Camogli surfaces into view with its orange and yellow pastel terracotta houses that line the sea. Camogli appears to be the secret that Italians have retained for themselves from amongst all the other glamorous destinations on the Ligurian coast. The locals strut about in tailored uniforms of catwalk couture, eating pesto and chatting in rapid Italian. Eduardo and I took our time to try out the local cuisine favourites, these included a traditional sea bream cooked with olives and potatoes, the delicious regional mussels served with cheese and a mushroom pesto pie. A combination that certainly satisfied my craving for all things pesto. Oh the memories! 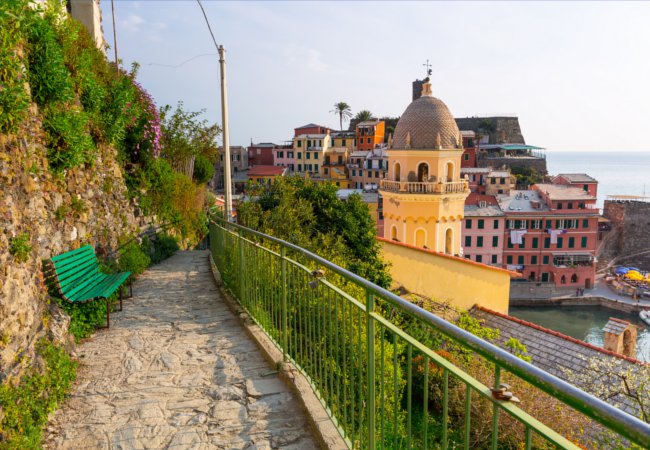 As we follow the sunshine along the dazzling Ligurian coast we arrive at our final destination of Rapallo, before we caught our respective flights home at Florence International airport. Not wanting to bid either the region nor our budding friendship adieu, we spent the day relaxing on Rapallo’s pristine beach, where the sunshine danced on the ripple of the waves. We let the time wash by us as we watch the flow of crowds, for which Rapallo is known to attract a glittering throng. We also enjoy more than our fair share of rich creamy scoops of gelato,  convincing ourselves that something this tasty must surely be good for us!

But such is life, that all sweet things must eventually come to an end. As we polish off the last of our gelatos, sitting on the beach letting the dazzling sun coat us in that famously attractive Italian tan, we plan and scheme as to how exactly we could find ourselves doing exactly this, this time next year…